The BSI-TOYOTA Collaboration Center (BTCC), which was established in 2007 by RIKEN as a collaborative project with Toyota Motor Corporation , Toyota Central R&D Labs, Inc., and Genesis Research Institute, Inc. made a demonstration of their developing wheelchair which you can manoeuvre just by brain wave, i.e. thinking. 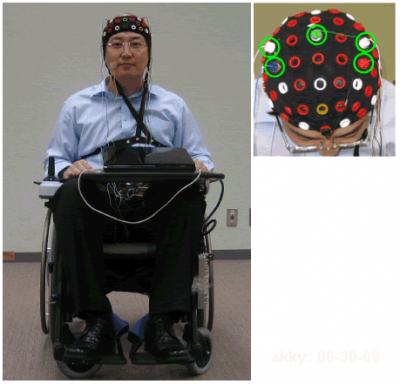 The demonstrator showed when he imaged a person walking with his two feet, the wheelchair went straight. When he imaged moving his right hand, it turned right.

This kind of experiment is not the first in history, but this one realizes brain-wave analysis in as little as 125 ms, which makes the wheelchair speed practical for real usage.
The catched commands accuracy rate is 95%, which they told is one of the highest in the world.
As on the diagram below, the system knows which part of brain are active when the person images some defined shape/concept. 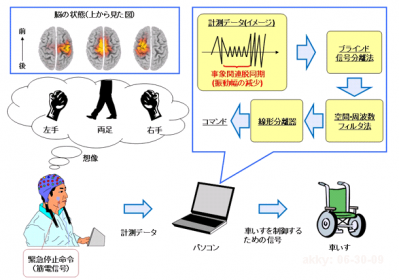 Although Toyota seems to be involved a lot, at this point they are not thinking to implement this technology into cars soon, on their comments. It is expected to be applied for nursing care field.
via Science Portal [J]