Jason Calacanis, a big name in Silicon Valley (founder of Weblogs and Mahalo, legendary blogger,VC etc.) visited Japan last week for the first time. We had dinner with him and with other famous Japanese bloggers.
Japan’s best-known bloggers attended this dinner meeting, including Dan Kogai (who is also the ex-CTO of Livedoor), Masato Kogure from Netafull, Masaki Ishitani from Mitaimon [J], Motohiko Tokuriki who started Agile Media Network, Japanese Bloggers Ad Networks, some TechCrunch Japan staff, Asaijin writers, and others. 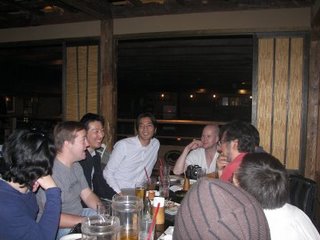 (Photo by Serkan Toto)
The dinner was held at a Japanese restaurant called “Gonpachi” in Tokyo’s NishiAzabu district. This restaurant is known as the place where President George Bush met with former Japanese Prime Minister Junichiro Koizumi. It also inspired Quentin Tarantino, in his film “Kill Bill: Vol.1“, to create a similar restaurant named Aobaya used as the locale for the impressive scene where Uma Thurman slices hundreds of people with a Japanese sword. 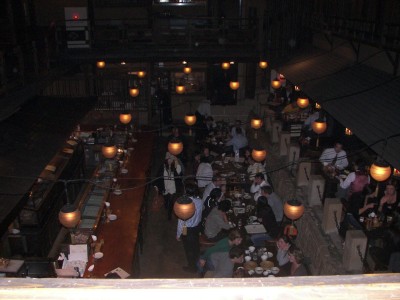 Here are responses from some of the other guests who enjoyed the night with Calacanis:
Tokyotronic: Jason Calacanis, Japan’s super bloggers and entrepreneurs plus myself
Netafull: The founder of Weblog Inc. Jason Calacanis recommends these iPhone Apps[J]
Akky Akimoto: I met with Jason Calacanis[J]
Masaru Ikeda: Drinking with Jason Calacanis and Bloggers[J]
and me,
Fool on the Web: I met with Jason Calacanis[J]
Jason introduced us to a couple of interesting iPhone Apps and in the end he was playing Ocarina for the iPhone by Smule with Masato Kogure.
He was also discussing with Motohiko Tokuriki what the ideal relationship is between advertising and bloggers as he wrote in his article: Ad Networks Are For Losers.
As for me, he asked whether I had watched the Japanese film “Ikiru” by Akira Kurosawa. Unfortunately I hadn’t. He was surprised by my answer and said that it was one of his favorite films. He said that it was a classic masterpiece. Then Jason outlined the movie for me.

“There is a man who only stamps and signs documents. It’s a useless job. One day he is notified that he has a very short time to live. He is dying from a grave illness. He realizes he has not done anything worthwhile in his life. So he decides to do something meaningful… Now you need to watch the film to see what happens afterwards.”

It seems that it’s quite an interesting film that might have affected Jason’s view of life.
There is also a blog posting by Umihiko Namekawa who served as a guide for Jason during his stay in Tokyo.
Jason Calacanis’ Sayings in Tokyo[J]

“Raise money when the economy is booming and improve products when the economy is in a slump.”
“The blogging system was already ready in the mid 90s. Do you know why the blog started to boom in the early years of this decade? Because by the end of the dot.com bubble the number of geeks who had lost their jobs and who had a lot of time to waste had increased. That’s the reason Flickr became an instant hit.”

Namekawa says that after Jason said “Tokyo’s subway is as complex as New York’s”, they talked up a storm about the movie Taking of Pellam 123.
He also quotes some other interesting words by Jason.

“The really disruptive innovations occur when the economy is down. I definitely think the same thing will happen within the next few years.