After having drawn 15 million members to the site (or approximately 1 in 6 Internet users in Japan), Nippon’s biggest social network Mixi now thinks the time has come for some offline cross-promotion. 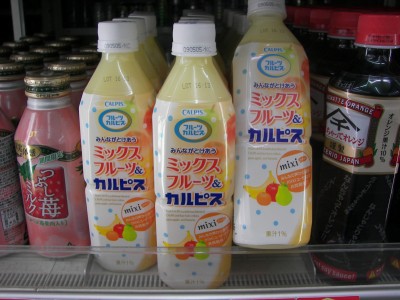 What you can see above is Mix Fruits & Calpis, a special version of Calpis, a popular Japanese soft drink that normally has a milky, yogurt-like flavor to it ( the brand name is Calpico outside Japan).
But the collaboration between Mixi and Calpis Co. Ltd., the company behind the soft drink, isn’t just an ordinary example for cross-promotion in Japan. Mixi actually established a Calpis project community on the site (which doesn’t exist anymore) and asked its members to come up with ideas for flavors for the drink.
Mixi also let users decide which catchphrases would be used to promote sales. Even the final design of the bottle was determined this way. Not a bad idea to boost customer and user involvement.
A 500ml bottle of Mix Fruits & Calpis costs 147 Yen (1.50 USD / 1.20 Euro) but there is also a 1.5l bottle available for 347 Yen (3.60 USD / 2.80 Euro).

Mixi also tied up with Osaka-based noodle maker Acecook [JP] to get its brand name on a number of noodle cups (see picture above). The Mixi noodle community [only accessible if you are a Mixi member] currently boasts over 4,000 people who contributed ideas that resulted in four different products. Mixi noodles with bacon, egg and vegetable flavor, for example, cost 190 Yen (2 USD / 1.50 Euro).
PS
Yahoo Japan also seems to have a soft spot for the noodle industry [JP].