Novels and poetry written, bought and read on cell phones are nothing unusual in mobile phone-crazy Japan.
Now it came to light that Jakucho Setouchi, a 86-year old Buddhist nun has written a long-running cell phone novel series (keitai shousetsu in Japanese) without disclosing her real name for several months.
Setouchi is an accomplished writer and currently lives in a Buddhist temple in Iwate prefecture, Northern Japan. She is well-known for her translation of Tale of Genji, said to be the world’s first novel (written in the early 11th century). 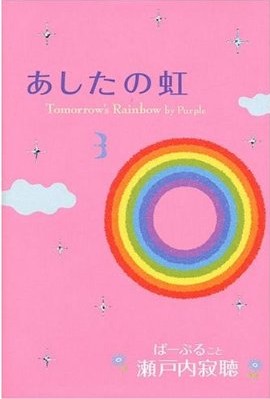 The digital love story, which is entitled Ashita No Niji, Tomorrow’s rainbow, is the first she has written on a cell phone. Setouchi chose “Purple” as an alias and began writing the novel in May this year. The story was distributed to Japanese cell phone users in several chapters and finally came to an end just this month. You can take a look here [JP].
Japanese publisher Mainichi started selling the digital novel in print form last week. The book, which is priced at 1,050 Yen (10 USD/7.30 Euros) and available at Amazon Japan, for example, is 248 pages long in 19×12.6x 2.4cm format.