Official Google Blog (Japanese) announced [J] that their gmail on PC now became capable to send Emoji, emoticon-like letters supported by Japanese cellphones. (receiving emoji-mail from cellphone has been supported already.)
Even in English mode of gmail, your “Rich formatting” mode has a new set of emoji selector. 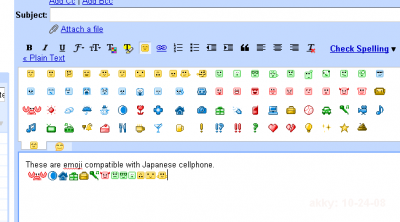 I sent a mail with emoji-s from my gmail to cellphone. Most emoji are shown properly, though few letters are not. Maybe because emoji sets have few incompatibility among 3 carriers (NTT Docomo, KDDI au and Softbank Mobile). 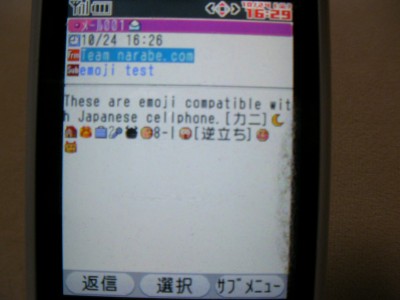 When the recipient have Japanese cellphone, Google server converts them into emoji character codes. On regular mail client including gmail, the mail with emoji seems to be sent as a HTML mail with images.
It is explained that this new feature was lead by Google Tokyo team but worked globally.
[Update] The official English Gmail Blog followed to announce. Interestingly, there are no mention that the idea was from Google Japan (as Google Japan team claimed [J]), nor it was for Japanese mobile users. So it is explained “to help you communicate” for the rest of non-emoji world.