Last week I attended an information event for Bloggers organized by Agile Media hosted at Yahoo! Japan’s offices in Tokyo Midtown.
The theme of the event was Yahoo Japan’s soon to be launched ‘Interest Match‘ [J] advertising service. The technology displays adverts based on previous pages people have viewed and page referrer information in addition to the content of the page with the advert. Advertisers can also target adverts by gender, age, geography and time. The service was billed as a development beyond context sensitive adverts. The technology is developed by Yahoo! Japan and will initially only be available here. 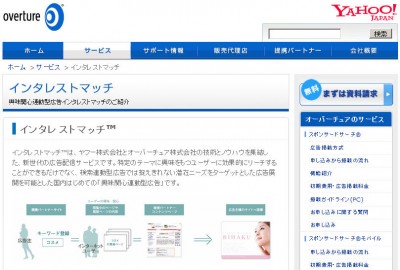 The pages a user has visited in the past are tracked using a cookie so this means that it won’t be as effective if multiple users use the same login on the same computer or if you use more than one machine. One attendee described the system as a ‘cookie devouring network’.
The first questions in the Q&A were not surprisingly about Privacy. In Japan there is a hyper-sensitivity to privacy. In the discussion that ensued it was pointed out that there is not really anything malicious happening, but generally user’s may feel it’s ‘kimochi warui’ (perhaps roughly translated in this context as ‘creepy’) if they felt that their browsing was being tracked and that data used on other sites.
As the event was for bloggers many of them said this privacy issue would be a concern, but other said they would be happy if it helps increase revenues from advertising. 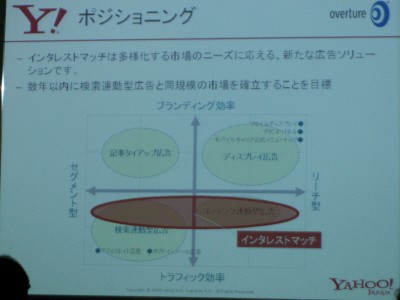 The evening finished with workgroup session. The bloggers were asked for ideas on tactics to help get site owners using the new service. Suggestions included off-beat ideas such as a TV feature showing people who made millions using the new service or who lived off Yahoo! Points. Other suggestions where making the adverts easy to install and use. Finally the winning idea voted on by Yahoo! staff was to make the data collected in the service ‘open’. It was great to see recognition of the ‘opening’ trend and an interest to go in that direction by the staff.

Latest posts by AndrewShuttleworth (see all)