ESPer2008 conference has been held with 100+ attendees in Shinagawa, Tokyo at 14th September 2008.
ESPer is a conference held by alumni of the Mitoh software grant (Exploratory Software Project) (in English). The Mitoh is a grant by Japanese government which is given to individual software developers. There are around thousand Mitoh alumni in Japan and they have strong network.
Unlike other government subsidiesin Japan, Mitoh is only given to individual software developers. Companies like Hitachi or Sony cannot receive the grant. In other words, most of IT subsidies goes into big companies. Amount of each grant varies from 1 million yen to 44 million yen. Foreigners living in Japan also can apply for the grant. 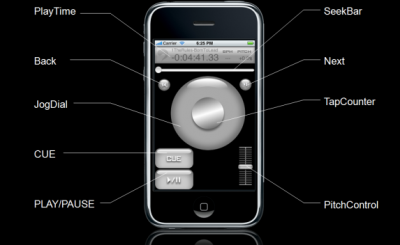 Atsushi Hoshino talked about his demo trip to San Francisco. He demoed an iPhone DJ software “IPJ” (in English) in the front of Apple Store San Francisco during WWDC. His guerrilla marketing effort is very funny and new to Japanese software developers.
IPJ has many features which are needed by DJs. Unfortunately IPJ cannot access to a music library of iPhone due to a limitation of iPhone application API. So users must transfer musics separately for IPJ from iTunes.
IPJ will be released soon. Stay tuned. 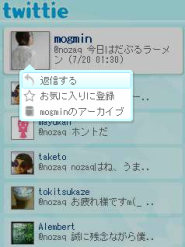 Shohei Osawa of Naked Technology (in JP) demonstrated ‘Colors‘ (in JP), a RIA (Rich Internet Application) browser for Japanese mobile phones.
At this moment, Colors has an Java implementation only for Docomo phones. As we reported before, Docomo mobile phones can run Java application.
They have two example applications. A twitter client ‘twittie’, and a flickr client ‘flickkie’. Those applications have quite cool user interface. User interface is written with HTML-like XUI language which is created by Naked Technology.
[Disclosure] An author of this article, Shunichi Arai, has received Mitoh grant twice which are worth more than 10 million yen total.