Idolm@ster(Idol-master, abbrev. Aimasu in Japanese) is originally an arcade network game, then became a XBox360 game which is sold only in Japan. You will be a producer of a virtual 3D girl band and train them to be popular singers (kind of “Sim People” with a goal?).
The game itself is not a big seller, as Microsoft XBox sales are so bad in Japan, however, it attracted enthusiastic amateurs and even some professional video composers. They use the game to get material for their movies, modify each video frame, add handwriting animations, cut and slice the material and mix them with Japanese songs (mainly pop music but sometimes you will see deep selections). They set their publishing stage on Niconico Douga. Here “Idolm@ster” MAD movies were born. 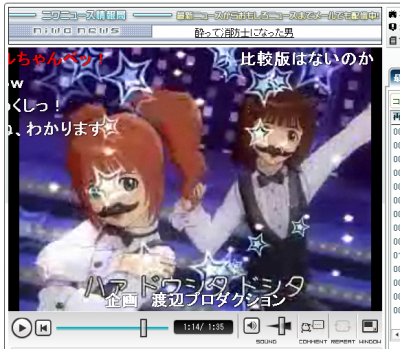 “MAD” or “MAD Movie” is a Japanese word which means parody/remix video made from (usually) Japanese animation and songs. It originates from MAD (audio-)tape. It’s not a dictionary word, cannot be an original Japanese, and I could not find what MAD stands for. I know US MAD and MAD.TV but am unsure if there is a relation.
Idolm@ster MAD movies became popular quickly and also supported Niconico Douga’s growth. They are often represented in All-Niconico movie ranking.
Recently, those “producers” gathered their fun movies to make a whole day program called “24 hours Aimasu TV” with all types of real TV program parodies.
So now thousands (literally. Movies tagged for this genre exist over 35,000. I cannot imagine how many creators are involved in this movement in total.) of Aimasu videos are stored and available to watch on Niconico Douga. However, as you know, Niconico Douga requires user registration and the language barrier keep out non-Japanese Internet users away. Niconico Douga allows video embedding to selected blogging platforms, but they are carefully selected one by one, which, I guess, aims at holding traffic under Niwango’s manageable threshold.
Apparently, some of those creator troops want more opportunities to express themselves. So they made a new English blog specialized in introducing Idolm@aster MAD videos for non-Japanese. The iDOLM@STER MAD World Service 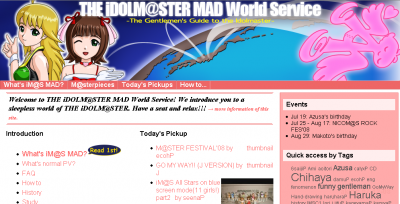