livedoor announced its popular Cos-Play (Costume Play, dressing up in fictional characters most of which are from Anime/Manga) site’s renewal and English localization today, June 12th 2008.
The site “Cure” was opened in 2001, has been getting 300,000 registered users including 60,000 “Cos-Player”, and now 50 million page views in a month, which is the biggest in Japan. 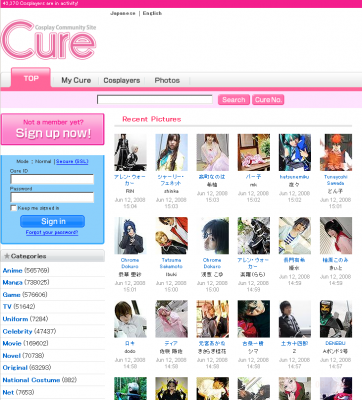 Cure, even though they have been having Japanese site only, got more than 10% of their users from overseas, and that ratio is still growing. So they decided to internationalize the site aiming for more users from America, Asia and Europe.
Their mobile site ( http://m.curecos.com/ ) has been also remodelled, however, the access to the mobile site is limited to Japanese major carriers, NTT Docomo, KDDI au and Softbank Mobile.