This Tuesday, the 9th Tokyo2point0 event in Harajuku/Tokyo was held. As always, the venue was totally crowded. More info can be found on the Tokyo2point0 site, the Facebook group or on Mixi.
This month the event featured two presentations which left more time for networking. I had the feeling that the event was more fun and fruitful because of that. Also, both presentations were given in English and Japanese this time.

My friend Toshimasa Ishibashi delivered an excellent presentation about the latest developments in Recruit’s Internet business. The Tokyo-based company is a real powerhouse and employs 7,660 people. Recruit is active in a number of industries such as the Web, printing, publishing, education etc. etc.
The company operates over 50 web sites in which 13 categories of API are currently used. Toshi’s presentation was focused on that particular aspect. He aims at opening Recruit by using more API in the company’s web services, thus generating more traffic and profiting from the long tail of the web. 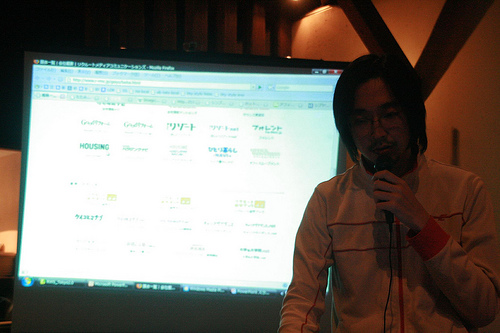 (all pictures in this posting courtesy of my friend Professor Ichinohe)
Toshi said he follows a user-centered concept by evangelizing the idea of API in his company. For example, people should be able to incorporate content from Recruit web sites into their blogs without hassle. The API approach makes it possible for users to customize the adopted content. For example, an API makes it very easy for bloggers to display their personal favorite restaurants from a Recruit restaurant information site in a flashy way.

Lance Shields was responsible for a very unique presentation which was heavily focused on digital art in virtual worlds, namely in Second Life. Lance -who is an artist also in the offline world but now works for a company- is active in Second Life via an alter ego called “Juria Yoshikawa”. Yes, he chose a female avatar due to problems he had when he first chose to be a male one. 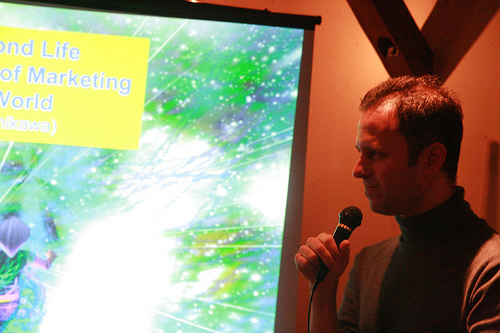 Juria Yoshikawa is one of the most famous artists in Second Life and Lance spoke how he managed to get to that stage.
He identified 10 success factors:
– Be active in groups
– Take care of friends and associates
– Organize events
– Offer new content regularly
– Be active in communities
– Be honest
– Collaborate with people
– Spread the word everywhere
– Bring forward outstanding concepts and ideas
– Don’t harass people with too much activity
You can watch both presentations on video here (courtesy of the organizer, Andrew Shuttleworth).