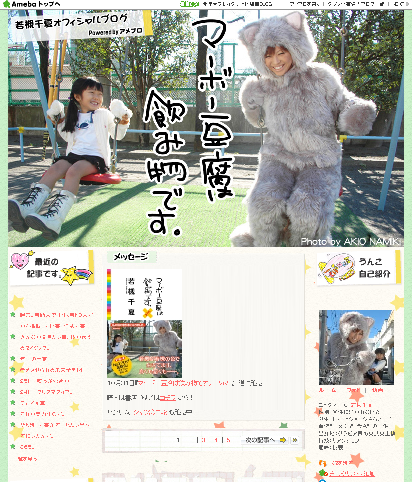 Last month she once implied about her blog’s end and caused a lot of reactions from her readers and media, which ended up to her apology for confusion, but it became real this time. Real reasons to retirement are not actually disclosed on her last post. She wrote it is not her retirement from show business, but only stops blogging “to do something else”.
Ameba blog’s celebrities section is providing blog hosting to over 1,100 Japanese celebrities, and gets 450 million page views per month. Although their free blog hosting service is not the most popular one for regular bloggers, CyberAgent has been leading to other Cocolog, Yaplog, livedoor blog, etc in this (probably) most influencial category.
Those blog system providers(such like bloggers.com and typepad.com in US) often buys popular celebtiries bloggers out of others. Officially, those companies earns from advertisement on the blogs. Since some top celebrities bloggers recommendations let apparel and cosmetic products sold out nationwide, there are rumors of hidden pay-per-post-like activities behind.
Relatively speaking, Japanese Internet users tend to follow mass media’s influences, TV, newspapers and magazines. The web is not an alternative but a cooperator/supplement. For example, Agile Media Network(AMN), bloggers network advertising agency such like Federated Media, keeps opinionated A-listers in Japanese blogosphere. However, even the top blogger from AMN earns couple of million page views per month at most.
[disclaimer] Akky AKIMOTO belongs to AMN network with his tech-blog as a pro-blogger working for Cybozu Labs in his daytime job.