The first part of Bounen Kaigi report is here

Co-hosts talked which net services they are interested in recently, their own project plans for 2008.

From all attendee’s votes for “The Kanji letter of 2007”, Yahoo! Japan guys chose a letter “Warai”(langh, smile). 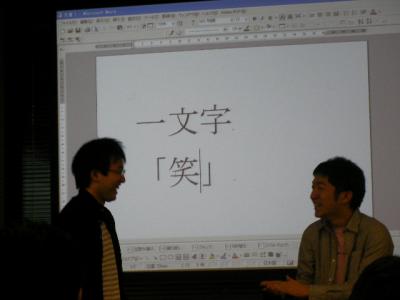 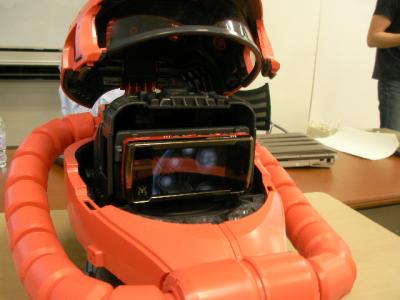 (*1) SoftBank, the 3rd share in cellularphone carrier in Japan, owns over 40% share of Yahoo! Japan, which is higher than US Yahoo! Inc’s 33%.
(*2) “Char Aznable” is a popular character in animation “Gunzam”. Its battery-charger is robot(mobile-suit)-head shape. This ridiculously expensive limited model was sold out in spite of its price, 130,000 yen (1200 USD).

The last, and probably the most important session is, as always, Zentai Kaigi. all attendee were teamed up by 6 people to make up a new net service idea to tuckle a challenge.
The challenge was to think about new innovative service by filling up lacked part to this sentence,

There are much more conferences and unconferences actively held in 2007 lead by networks on social network services, weblogs and movie-shared sites. Now, at the end of 2008, you are looking back that your accidentally invented meeting-support-service caused all the rage, made people have 20 times more conferences than before.
This revolutionary service, (________), solved the typical (________) problem on meeting by (______ing) with utilizing (________) on the net. 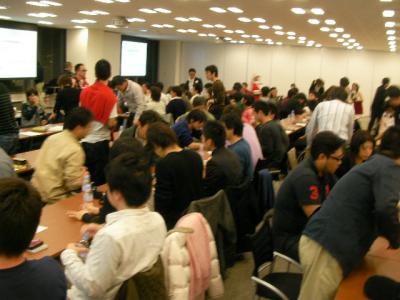 1st prize was given to the team “Cancel wo dogenkasento ikan”, which adds user-reputation review system on top of study meeting management system, to be able to exclude habitual “no-show” applicants.
“Dogenkasento ikan” is one of 2007’s buzzword, which is Miyazaki prefecture dialect means “must solve by any means”.

After-party was held at Izakaya (Japanese style bar) in Roppongi with around 7-80 attendee. Every year-end, this after-party has been deepening exchanges among entrepreneurs, engineers, marketers and other influencers.
See Also:
Yahoo! Japan part detail report by BroadBand Watch [J]
Event report: Bounen Kaigi 2007 (a lot of pictures) [J]