Japan’s biggest e-commerce company Rakuten (US$15 billion market cap, about 80 million user accounts in Japan) has started featuring Pinterest on some of its biggest websites yesterday.
Big R caused a major splash in back in May when it led a massive US$100 million investment in the American startup.
Rakuten CEO Mikitani was quoted as saying that his company has many dormant users with a Rakuten ID who he would like to see re-activated by teaming up with Pinterest.
TechCrunch wrote in May:

It is this ID that will potentially become the lynchpin of a commercial service on Pinterest: “We want to enable our users to pin their own images with our ID,” he says. “Users can click and buy with it, and in the future we can create more new services.” He notes that the “rich, graphic social network” can be used for “so many interesting ideas using the Rakuten ID.” One other area, TechCrunch understands, is for users logged in with Rakuten IDs to pin images and then use those pins to buy items away from Pinterest, on Rakuten’s own Rakuten Ichiba site.

And now this plan is being put into practice.
“Pin it” buttons are now visible in the Rakuten Ichiba virtual mall, Rakuten Travel and Rakuten Recipe, enabling users to send images to their Pinterest pinboards with one click.
The “Pin it” button is actually hard to spot, but don’t be surprised: that’s typical Rakuten design. 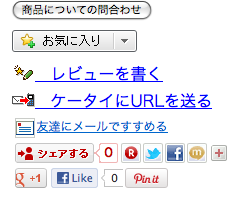 What I find weird is that certain pages don’t seem to feature the Pinterest button, i.e. the one for the Kobo Touch reader that was introduced a few days ago and is currently the most popular item (perhaps because it’s just a pre-order): 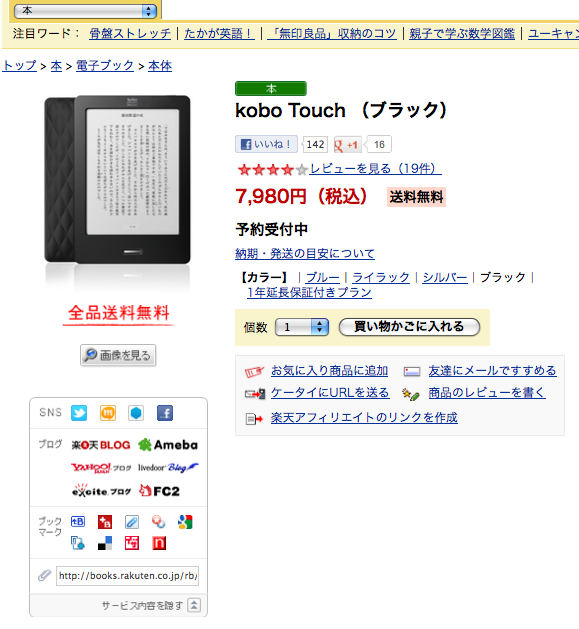 For beginners, Rakuten also set up a special “How to use Pinterest” page, which can be accessed here.