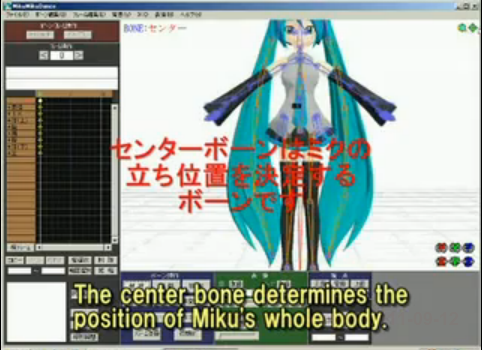 By MMD, many Japanese hobby video authors, who play around on Japanese online movie sharing service Nico Nico Douga, can make dynamic 3D animations with 3D figure data.
In August, the 7th online MMD contest was held virtually on Nico Nico Douga. Contestants were given some themes and create movies, compete with Nico Nico users vote.
The left side movie was one of the contestants, and the one with the original is “Hikaku douga”(movie for comparison), to show how their video is “synchronized” well with its motif.
Here is a comparison movie with two more Everybody, one of which is a recent Japanese internet meme Enoch frEl Shaddaiom.
[nicodo]sm15478068[/nicodo]
The MMD contest had hundreds of such movies. Unfortunately most of them requires Japanese (especially anime) cultural contexts, but some use foreign-origined materials.
Remake the highlight scene of Equilibrium (“Rebellion” in Japan), Gun=Kata movie having cult-like popularity with Hatsune Miku.
[nicodo]sm15376706[/nicodo]
Children’s picture book “The Missing Piece” is known in Japan, too. This “Miku wo Sagashini”, parodies its Japanese title “Boku wo Sagashini”(“Seeking Myself”) again features Hatsune Miku as a character.
[nicodo]sm15355902[/nicodo]
If you have ever seen Ramen’s The Japanese Tradition -Dogeza-, sarcastic gag film explaining Japanese genuflexion form of apology, is reproduced.
[nicodo]sm15354185[/nicodo]
Sega’s 3D battle game Virtua Fighter 2 demo scene with Vocaloid characters
[nicodo]sm15400585[/nicodo]
The grand prized was given to this movie, a popular game character sing and dance a popular Vocaloid song.
[nicodo]sm15356096[/nicodo]
As always, if you want to watch more of these movies than the ones copied into YouTube by someone, registering Nico Nico Douga and search by “MMD”, “Miku Miku Dance” will give you thousands of MMD-made movies.
At this point, many of the user generated movies are trying to mimic the original, boasting how much they can reproduce scenes on the commercial products. But this widening trend with a lot of sunday video authors and free tools could generate something really interesting and original in near future.