Asahi Shimbun, one of the largest newspapers in Japan and the world, is to start “Asahi Shimbun Digital” at 3 p.m. today, May 18th 2011, which is seen on its teaser page [J] (thanks @kansai_takako). 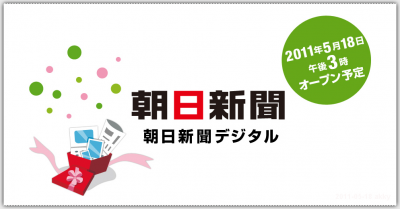 The teaser page does not tell much, but I think the “digital” means paid-subscription of online version, like Nikkei has been doing on its Nikkei Digital.
Asahi Shimbun has been running its online site Asahi.com, and selling archive database services under several different packages [J] to enterprises and individuals. In July 2009, they purchased CNET Japan, one of the largest online IT news media in Japanese.
[Update] It has begun at 15:00. As I expected, it is a paid subscription service.
The top page of the Asahi Shimbun Digital is typical online newspaper site, and the design is different from Asahi.com. Except the top page, all articles are not accessible behind authentication – login and password. 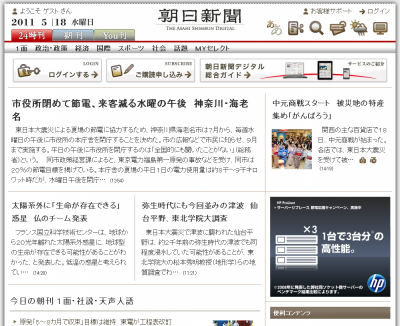 Prices are very similar with Nikkei’s one. If you already subscribe the paper version (3,800 yen = US$47), you can access the digital version with extra 1,000 yen($12.3). If you only want the online version, it costs 3,800 yen. So same as Nikkei, they show their preference that their readers keep reading its paper version.
To subscribe, you need to register on Jpass, an online payment service provided by Asahi Shimbun. By the end of July, it is readable for free.
Asahi.com reports [J] this new Asahi Shimbun Digital at 15:01 today.