Twitter has just announced on its Japanese official blog that their trending topics is now featuring Japanese language trends. You may choose “Japan” or “Tokyo” from worldwide trends on its sidebar. 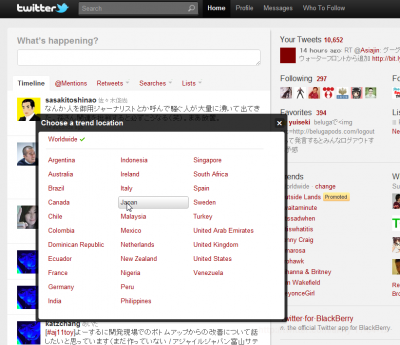 Although Japan is one of the most Twitter loving nation, Twitter’s Japanese language support has been always poorer. Twitter became popular even before menu localization, which was very rare for imported web services in Japan. Twitter search is still not working well with Japanese, if you try to search by few Japanese words, it just gives up and shows nothing. Hashtag, though this might be same for all non-latin language users, is only available in roman alphabets.
Twitter trends ranking, which I often saw that many English blog media talked on it a lot, had been displaying English rankings for over years for Japanese users, which was almost useless.
In other words, Twitter’s popularity is established in Japan even without Trends part. So Japanese blogosphere can expect adding more buzz based on this trending topics from now on.
Here is the “Japan” trends I am seeing today, 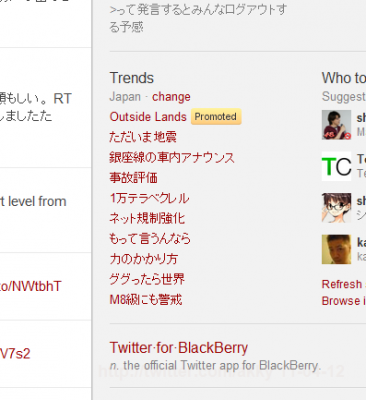 Promoted ad slot does not show Japanese ad, which probably Twitter is still working on. The topics are;

The Tokyo ranking was almost same. It is no wonder because 25% of population are in greater Tokyo, and web users ratio are even higher. 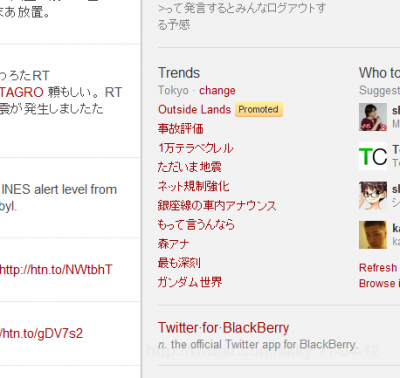