Nifty [J], a Fujitsu-affiliated internet service provider/web portal, announced that they are going to close their podcast portal.
Podcasting Juice [J] by Nifty is one of the popular podcasting portal began in July 2005 in Japan. 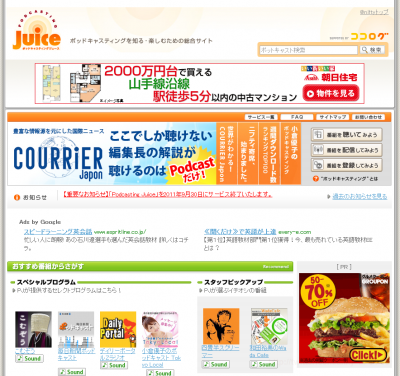 The service was announced to be terminated on September 30th 2011. Nifty said that it is difficult to keep the service as the number of users have been decreasing recent years.
On their recent weekly download ranking, the top podcast channel is downloaded by about 48,000 people per week.
There are other podcast portal like Podcast Rank and mixPod, but none of them seem successful.
Yahoo! Japan, Japan’s largest web service, gave up Yahoo! Podcast [J] on April 30th, 2009 (began on May 24th, 2006).
Podcasting is less popular in Japan when comparing with US. Audio book is also unpopular in Japan. That is because car commuters are not majority in Japan, and when you commute on train with cellphone-wired, you prefer to kill time on mobile web services.
There should be also noted that some users who might have been interested in airing podcast moved to other live stream platforms, such like Nico Nico Namahousou and Ustream.