A blog juggly.cn reported that they got a leaked image of Fujitsu’s new 2011 summer model cellphone for Docomo, which name is LOOX F-07c, which is a dual boot cellphone with Symbian/Windows 7. 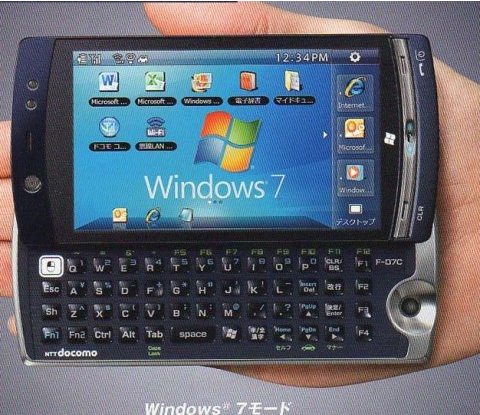 It’s not “Windows Phone 7”, “Windows 7”. The reported specifications are:

Symbian might mean that the regular Japanese feature phone OS. Many of Docomo’s feature phones are using customized Symbian OS for Japanese market.
juggly.cn says that there has been no official announcement yet so you should see it “as a rumor level”. Another anonymous comment on 2 channel [J] says that the battery will last 1.5-2.0 hours in Windows 7 mode.