[Update] Volunteer-made chart [J] comes based on the MEXT data. (Fukushima line is not drawn. see below for why) 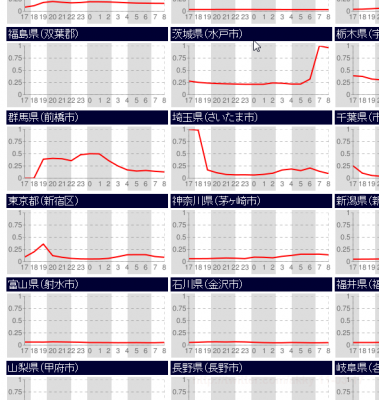 So far, some prefecture around the Fukushima plants show a bit higher numbers, but still very low, under 1μGy/h. 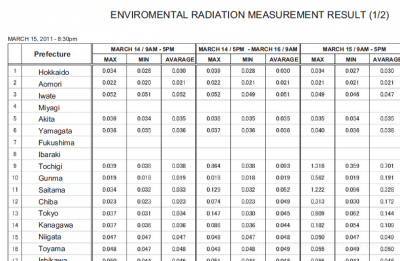 Japanese government has worked on another information disclosure to resolve people’s free-floating anxiety. As traditional media, especially TV, many of which have been reporting on Fukushima nuclear plants fallout intensively and even people living outside of Fukushima are getting panic.
I went to buy some food with my daughter yesterday, an old gentleman behind us in the long line in a supermarket told me that I must let her wear mask, because TV had said that radioactive are flying in Tokyo… I don’t think TV news really told that, but I can easily guess that they race how sensational they can be. @FrankieBit told me a funny news that Italian experts measured radiation levels in Rome and Tokyo, and Rome got higher number on that day.
There were some Geiger counter reports on the net provided by individuals and local governments, but their authority could be challenged. Now, Ministry of Educational, Culture, Sports, Science and Technology(MEXT) is measuring radiation level at 47 prefectures and published it on the web.
Like a new English Twitter account to update crisis info, government’s IT usage becomes better now. They prepare mirror sites on Yahoo! Japan, Sakura Internet and WIDE Project, each of which has an English page or some English info.
To know how dangerous (or safe) the measured numbers are, students of Keio University translated an informational diagram to English [pdf]. 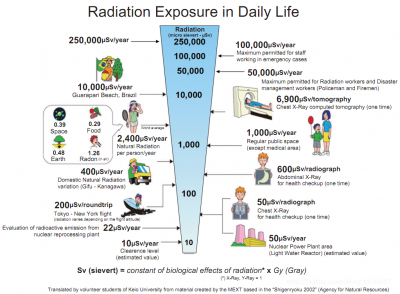 [Update]
Fukushima, Miyagi and Ibaraki data were not included in it when I wrote this post. Probably because they are near the disastrous points. Miyagi and Ibaraki are added later.
For Fukushima, data around the nuclear plants are given here.
Another measurement by districts in Fukushima can be taken from here in English on Fukushima International Association site, which seems to be a translation of this original on Fukushima prefecture local government [J].
Ibaraki prefecture gives the latest radiation level in several points on its website [J]. At 18:30 on March 17, numbers are higher than regular level but still small enough.
Japan Atomic Energy Agency(JAEA) discloses a chart with radiation level at their research centers.