Serkan had to stay at Narita and seeking flight for SXSW.
Another author Dominic Ken Gallello shot when the earthquake broke out at his office in Tokyo. 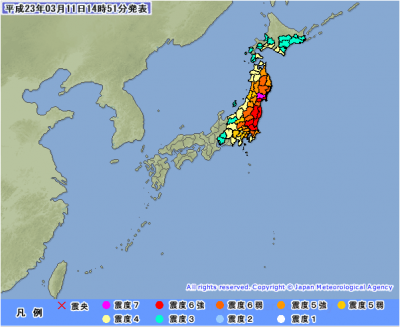 Magnitude 8.4 earthquake hit Miyagi and east Japan, around 14:51 March 11th.
Phone/cellphone network mostly stopped in east Japan. Twitter and Skype are okay. Yahoo! Japan top page was always dependable to get the news and alerts.
Twitter users are retweeting emergency phone services which do not consume person-to-person connection ability.
One is dial 171, on which you can leave a message at the phone center (family and friends can listen the message by phone number). English instruction is here.
Cellphone carriers provide bulletin board services. From your i-mode/ezweb/Yahoo! Ketai, you may post that you are safe (or other info) to your family and friends. To check it from PC, here is for Docomo, KDDI au and Softbank Mobile. (details [J])
People’s photos from Twitter timeline.
Hamacho, Nihonbashi, Tokyo

Crack in the ground (location unknown)

An insider of Japan’s public TV NHK’s twitter account(@NHK_PR) had approved an ustream user re-broadcast NHK’s earthquake news report via the user’s webcam by ‘his/her own decision’, redistribution of land TV program is not allowed usually. It was welcomed by net users. Later it seemed to be approved by the organization (as it is under emergency). [Update] NHK officially starts Ustream simulcasting on earthquake news (by our @masaruikeda)
Earthquake Early Warning (EEW) system did not work on the main earthquake this time. It worked when an after quake occurred around 19:39 at the same night though.
JR East and most of private railways in Kanto area stopped all trains, and likely not to resume today. Only train restart around Tokyo is Tokaido Shinkansen by JR Tokai to westbound to Osaka. Government announcement recommends office workers in central Tokyo not to try to return to their home, if their current place are safe. But many people starts walking from center to suburb along the main streets.
[Update] Tokyo Metro resumes to run Ginza-line only at 20:30. Toei buses are in service. Tokyo Toei Subways are/will be in service.

This person wrote, “I am going to walk back to home, as public transportation stopped.”

Show Evacuation Spots in Tokyo in large
Rice balls and sandwich are all sold out at convenience store in Taito-ward, Tokyo. Too many people who are supposed to go home at night can not move out of Tokyo.