On Thursday night, AntennaAsia kicked off a 5-day tech event marathon in Fukuoka, followed by Energy Informatic and AIP Cloud 3DAYS this weekend. AntennaAsia vol. 1 showcased two Fukuoka startups and one from Tokyo.

YouRoom is available as a free service for now. Kuranuki said that they are planning to add an enterprise account option, which provides more features for business use such as an official audit log report.

Kota Sakoda (@cohtan) from Pocketbox team presented Gemediar. Gemediar is a B2B video transcoding platform for sharing videos among various mobile carriers / devices.
Gemediar is best suited for sending videos to someone who is unable to view it in the same format because of cross-carrier incompatibility. Sakoda said they hope to completely eliminate the hurdles and confusion around sharing videos, especially among non-techie users. By offering a stable and affordable video engine, Gemediar helps other startups and small teams host videos without running into headaches associated with different formats.
Current pricing starts at ¥9,800/month with 5GB file storage. According to Sakoda, this translates to 15-50GB net space in comparison to other services with multi-carrier support, thanks to their optimization technology. 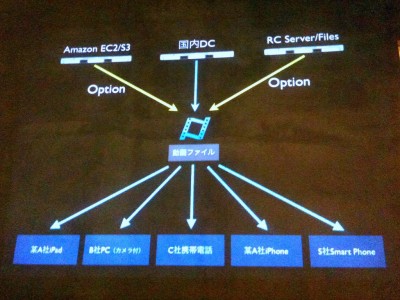 Toshiki Agata (@agata) from Nulab wrapped up the demo sessions by announcing the brand-new paid upgrade for Cacoo, their real-time collaborative drawing tool (for more info on the product itself and its past development, check out previous coverage on Asiajin). He said Cacoo has been steadily gaining both domestic and international users since its beta launch in November 2009. Currently 60% of Cacoo users are using the service outside of Japan. The United States and France are the top countries accessing Cacco besides Japan.


To grow Cacco into a profitable service, they are planning to aggressively expand their general userbase. The immediate action plan is to expose Cacoo to an existing large pool of users; they will be developing extensions for Google Apps Marketplace, Chrome Web Store, and a Facebook App. Agata added that he’d be happy to share their experiences and tips with startups looking for mentors in expanding their service beyond Japanese users.
AntennaAsia organizers said they modeled this event after SFNewTech/SVNewTech meetups. They want to continue this series of events to foster a similar community in Fukuoka by providing a place where startups can share their ideas and progress. Study meetups (Benkyokai) has became quite common in various local tech communities around Japan – there is a potential for this kind of demo/networking events to spread widely and connect startups, users, business owners, and investors.
The following two tabs change content below.