Whilst Apple reported to kill the CD in U.S., there are two big Japanese companies turned out to kill other legacy products.

SankeiBiz reported [J] that Sony said on 22nd that they had finished domestic shipment of cassette tape Walkman at the end of April 2010. The last 5 models (WM-EX651, WM-GX410, WM-GX788, WM-GX202 and WM-EX202) can be purchased only when they are in stock. Outside of Japan, Sony will keep selling the consignment products made by Chinese makers. 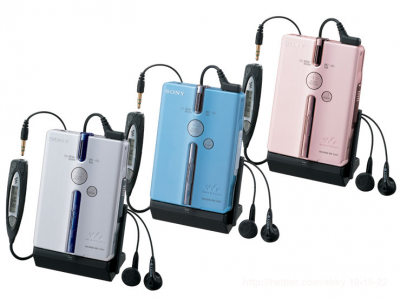 Asahi reported [J] that Sharp disclosed yesterday 21st October that they had discontinued PC development in 2009, two years ago.

Sharp keeps No.1 position in Japanese cellphone market with 26.2%, over 9 million set [J]. They also are aiming at e-book market with a new brand Galapagos, the first model of which will be sold this December, 2010.

Source Next takes USB Memory Software Package from CD-ROM – since 2008, they switched some of their software packages to USB memory based.
Sharp Mebius (Note PC brand) support page pulldown list only shows until 2009. [J]