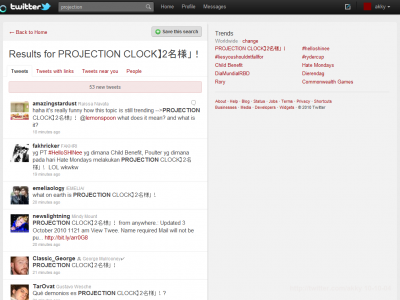 That phrase itself is mix of English and Japanese, which means

It is a part of full sentence in a marketing campaign run by Nifty, one of the biggest Japanese ISP/portal. They have been running a lottery for tweets on its new Twitter clients Twipple.jp on web/feature phone/iPad App.
The original whole sentence that Nifty tried to let people tweet was

That Analog Projection Clock is this one, 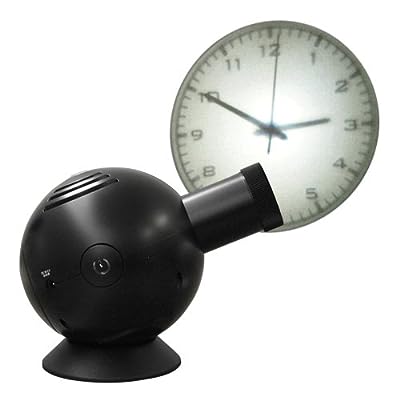 And this clock projects analog clock on wall like this, 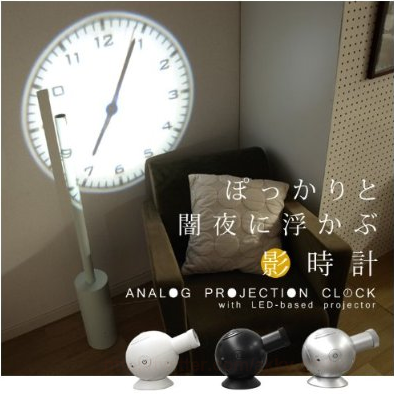 Twipple Lottery(Twipple Kuji in Japanese) has its Twitter account @twipple_kuji and that reports there are tens of thousands users tweet the designated text every day.
Twitter is very popular in Japanese but its Japanese handling is still poor, the extracted text being strange seems that Twitter could not parse Japanese correctly. Probably that is one of the reasons that Twitter Trending Topic is not provided for Japanese users.
As Nifty is quite big in Japan, it is not so strange that their Twitter promotion made many users to copy the tweet. But this lottery has been done since September 9th for every day, and this clock should not be the most popular prize. These are prizes list with photos, 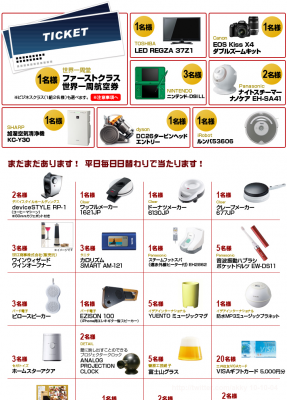 Maybe every day for short time these lottery tweets showed up on the world trending topic, but this time, by some unknown reason, some non-Japanese users found and propagated by asking what it means. I do not see what part made people today’s phrase so special. It could be some influential foreign user began this time buzz in English and other languages.
Unfortunately, the campaign has some strict rules like you have to tweet from that Twipple, the prize will be sent only within Japan, etc. So even if you tweet the full Japanese text above, you won’t get this nice(?) analog projection clock, Nintendo DSi LL or first class round-the-world ticket.
As 18% of the world’s tweets are said to be from Japan, not only by this Twipple lottery but other Japanese promotion campaigns could cause the similar things.
[Update] About 14:20 UTS, Twitter seemed to remove the broken phrase from the hot topics, which I guess done manually by official, though the word “PROJECTION” still remains.