SeatNext is a Japanese web service for people who attended a gathering to make a seating chart with Twitter icons, developed by a Niigata-based programmer civic [J](@civic).
You may add a Twitter icon one by one, or as a space-separated-list. 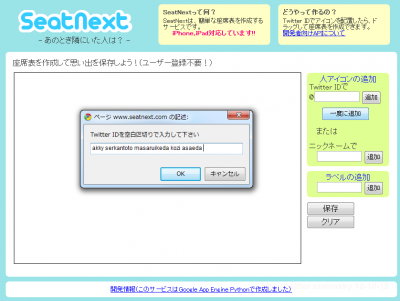 Then you layout icons as the attendees seated. You can also add text labels for furniture or others (like “door”, “screen”). 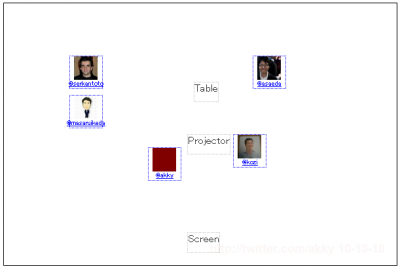 When you save, the permanent URL will be generated to share with other attendees. The saved chart can be accessed via the URL by anyone. You send the URL to others by e-mail, IM or QR-code to let others see it.
Here is an example seat chart of where Asiajin staff were at Asiajin Meetup Tokyo #2. You may make another chart based on the existing charts. So multiple attendees are able to help each other to remember the missed people, make complete record of meetup.
The service is running on Google App Engine, supports iPhone/iPad. Although the menus and buttons are in Japanese, there are not many boxes/buttons so you may guess them. The author made it English/Japanese bilingual, so it switches menu by your browser language settings. (See the comment. Thanks)
The service was intended for making seating chart, but you may generate other charts which can be drawn with Twitter icons, I think.
via Idea*Idea [J]