The 78th Comiket(Comic Market), the world’s largest self-published comic book fair, was held again this summer in Tokyo bay side.
This summer, there were 35,000 groups had booths and 560,000 people visited the fair for 3 days.
As such many people gather in a huge but single conference hall, logistics are always problem. Convenience stores around the venue prepare a lot of energy drinks.

As hundred of thousands people of course carry their cellphones, most of them are 3G and have browser so it is known that losing wave often happen in the festival.
Masayoshi Son, CEO of Softbank, No.3 carrier whose network is comparatively weak against Docomo and KDDI au, announced beforehand that they worked on the issue on Twitter [J].
During the event, Softbank’s mobile basement car were seen outside of the venue. But it was not the only countermeasure, WiFi Ninja. 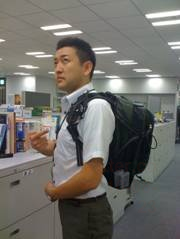 Kite Kamimura, a Softbank employee, uploaded the photo of the walking WiFi basement guys. Those guys carried the bag which has FON basement connecting to XGP network, run by the 5th carrier Wilcom, which is now supported by Softbank.
Softbank’s cellphone, both iPhone/iPad and latest feature phones support FON WiFi so by this they can reroute some of their users data bandwidth to WiFi.