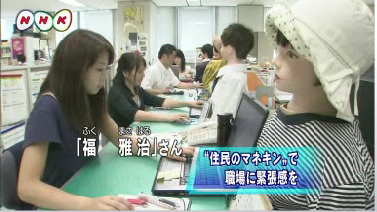 .
Kyoto prefecture office PR section set 5 upper-body mannequins on their desk to face to staff last month. The idea of these bodies comes from “Persona” method, by which local government workers can imagine their customers to serve.
Each dummy is named, given age, gender and occupations. For example, a dummy named Yoshiko Naniwano, 66-year old lady from Osaka to visit Kyoto for sightseeing, complains to them.
One worker answered to NHK on the video, “I feel like being watched. Tense feeling in a good sense makes me work more efficiently.”
They are planning to increase the dummies.