The uniqueness of Tieba is that it combined search engine and forum, by guiding search results to related discussion boards. If the searched word did not have a counterpart forum, users are suggested to create one.
On July 27th 2010, Baidu Japan [J] launched the Japanese localized version of Baidu Tieba under Baidu Japan, which entered into the market in 2007.
The new Japanese version has the same subdomain Tieba so that the URL is http://tieba.baidu.jp/ [J]. Interestingly, Baidu expect users pronounce “Tieba” as “te ieba” in Japanese, which means “speaking of (noun)”. The same sounds, different but well explaining the service’s characteristic on where users enjoy association of words. 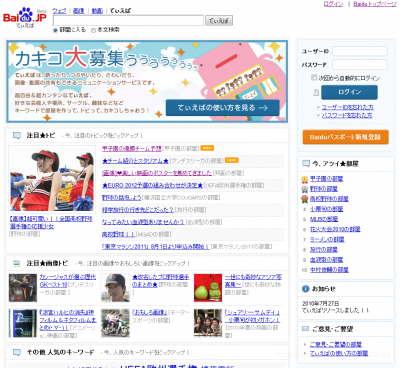 Tieba was one of the Baidu’s driving force to thrive in Chinese web. As there are no direct competitors in Japanese web, bringing it may have some possibility to change the game for developing Baidu Japan.