Naisyoku (Moonlight Job) is a new social game by Acquire Corp. for DeNA’s mobile social networking service Mobage Town.
The Japanese word Naisyoku is not so positive. It literally means “working at home” but the word is often used to refer ultra menial labors done by low-income people who are unable to take regular jobs.
On the game, your goal is to find your missing father who said to become “Naisyoku-Oh”(The King of Naisyoku) and disappeared. You earn game money by playing a lot of casual Flash-based games which are on the theme of menial tasks, such like putting a vinyl frog head into its body, putting promotion covers on books, removing low-pressured tennis balls, putting stamp on letters etc.

The logo of the game has a Roman alphabet notation “No-Syoku”, which is a mixed word of English(No) and Japanese(Syoku = Jobs). The Japanese word “Naisyoku” means moonlighting, but “Nai” sound can also be taken as “No” so the game title has double meanings of “moonlight jobs” and “unemployed”.
Acquire Corp. is also running a similar game “Gokuhin Kazoku” [J] (Ultra Poor Family) with the same menial tasks on another social networking service Mixi’s mobile platform. On this game, your father got bankruptcy and became alcoholic, your mother fainted and almost dying. You have to work, save money, feed and care your mother and hope the father recovers. 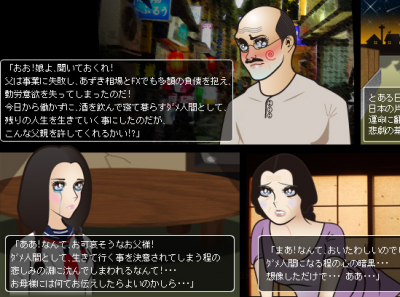 Both games follow the modern social game format, represented by mafia games. That means you can make menial workers buddy, proceed games by assisting and cooperating with them. Of course if you spend real money, you can speed up things and get some advantages.

All of three major Japanese social networking services now opens their social application platforms, and many companies and start-ups backed-up by VC are rushing into social gaming. As most of them are using the same template and decorate it with different themes, I understand that some of them are desperate to find a new unique theme not to be blamed as a copycat.
What makes me wry smile is that these guys taking up “simple labor works” as games-in-game unintentionally showed off something many social game addicts have not noticed, or ignored. Recent social games are designed under freemium model, and usually what players have to do is rather endless select-and-click loop, i.e. a menial task. Basically it is difficult to “lose” on those games, it is just how fast you can proceed on the designed track. In real life you will get compensation, in social games some people even pay to cheat to achieve something virtual faster than other players.

Acquire’s release [J]
Her Saccharine: What is Naisyoku? – Philippino wife in Japan explained her Naisyoku experience in English