Somehow Twitter catches on so much in Japan. Like Japanese tweets recorded on national team soccer game on the World Cup 2010 4 days ago.
Following the majority is one of the national character where social accordance is valued. Then, weird things are happening by people who are not necessary to get on the bandwagon. 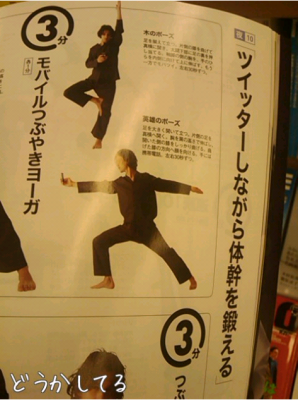 Japanese exercise magazine Tarzan [J] suggests a short training “Mobile Tsubuyaki Yoga”(Tsubuyaki means Tweet in Japanese). By it, you can train your body trunk with tweeting, as explained on the right side-note.
The top one is “Wood pose”. It tells, “Stand upright, turn one side of your knee outside, stamp your under thigh with your foot. Stretch up the opposite side’s arm with your palm facing inside. Handle Movatwi(=MovaTwitter) with the other hand. 30 seconds each.”
Emi, who took the photo wrote her impression on the image, “Doukashiteru”(Crazy). Totally Agreed!
via @amachang