Japan’s upper house election campaign period began on 24th June.
Internet updates during election has been banned in Japan. It was a discussion to legalize blog updates (but not Twitter, funny how they tried to draw line between them) recently, but it could not make this time in time.
According to J-Cast [J], incumbent upper house member Kenzo Fujisue, who is also known by his active tweets, keeps that rule and stopped tweeting “texts”, but tweet URLs. 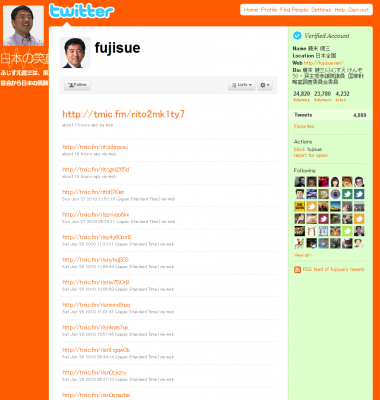 Those tweets, few to ten per day, point to third party Twitter service TweetMic, on where you can record voice message.
The Public Office Electian Law Act 142 says that the distribution of documents and drawings besides standard brochures are prohibited. This is applied to online documents like blog entries or tweets.
However, “voice” is not included in the “documents and drawings”, which he consulted both with his layer and MIC(Ministry of Internal Affairs and Communications). So he posts only URLs (which is an address to another location on the web, not a “documents”) and his followers can click to listen his latest speech during campaign period.
His voice messages are very short, few sentences within a minute. The messages are like, which prefecture he rounded that day, he visited 10 places in another prefecture another day, what he ate on breakfast at hotel, national soccer team’s win on World Cup, etc.