Japan’s social networks seem to be hitting a ceiling growth-wise, and apparently they increasingly feel the need to go abroad in order to grow.
“Japan’s Facebook” Mixi, which now counts 20 million members, is operating “Mixiu” in China. DeNA, the company behind mobile gaming platform Mobage-town (19.4 million members), has always been more aggressive in terms of internationalization. It operates MobaMingle, a mobile social network that can only be accessed from outside Japan; it launched MiniNation, a social gaming platform for the iPhone last month; it invested in Aurora Feint, a US-based social gaming platform, in 2009; and it also acquired IceBreaker, a US- and China-based maker of “mobile social networking software”, last year.
So far, only one of the big three of Japan’s social networking world has chosen to stay home: mobile gaming startup GREE. But Yoshikazu Tanaka, GREE’s CEO and the world’s second youngest self-made billionaire (following Facebook’s Mark Zuckerberg) at 32, today announced some big news via Twitter. 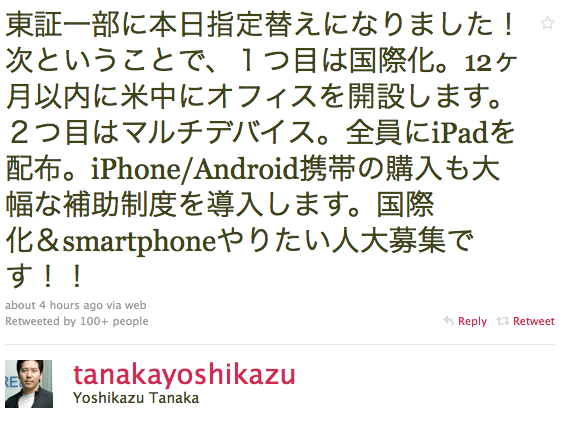 To make it simple, let me just translate his tweet:

“GREE moved to the First Section of the Tokyo Stock Exchange today! But there’s more. First, internationalization. Within the next 12 months, we will open offices in the US and China. Second, we will bring GREE to more devices. Every employee will get an iPad. We will also support iPhone and Android. GREE will start to mass-recruit new employees in order to handle internationalization and smartphone development.”

I heard Naoki Aoyagi, GREE’s CFO, talking about expansion plans into China during a discussion panel at the Global Mobile Internet Conference (GMIC) last month in Beijing, but the plans for the US come as a bit of a surprise (although DeNA already runs a subsidiary in California called DeNA Global).