One of Japan’s major television network Fuji TV announced and called for beta testers for their new online community site “Kimi to Fuji TV” [J] (“Kimi Fuji” in short) on March 15th. “Kimi to” means “with You” in Japanese. 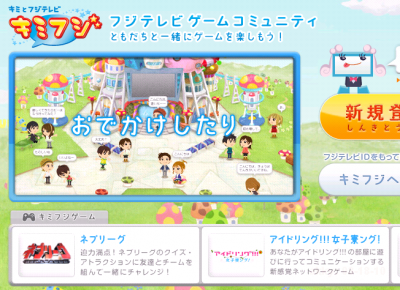 At beta, the site offers few social games which themed on their popular TV programs like “Nepu League” and “Idoling”.
On FAQ, it is explained that the virtual point “Gold” will be introduced at the official launch, which you can purchase for some paid games and virtual items.
There are not much games at now, and it is only for PC so it cannot be a serious contender of big 3 (Mixi, Gree and Mobage-Town). However, terrestrial TV networks still have huge influence and drawing-power in Japan, then this needs to be watched how much Fuji TV will give priority this web activitiy.
via Famitsu.com [J]