BCN’s cellphone sales ranking, which once was used to declare iPhone triumph in Japan, showed interesting status these weeks.
Last week, iPhone 3G (8G) sales was ranked at the 3rd, whilst the latest 3GS (32G) ranked at the 4th. 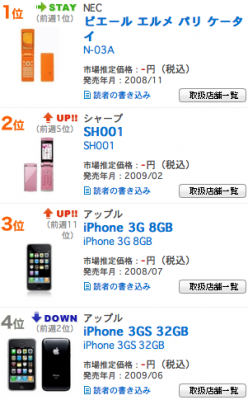 This week 3GS (32GB) takes back the highest position among iPhones ranked by 5th. 3G (8G) is 7th.
# iPhone 3GS are in supply so this is not by lack of 3GS products on shops.
Softbank Mobile, which exclusively sells iPhone in Japan, has been running “iPhone for everybody” campaign since early this year (2009-02-27), which gives iPhone 3G for free if you sign up 2 years contract. The campaign was originally set [J] until the end of May, extended [J] to the end of September, extended again [J] to the end of January 2010.
Softbank Mobile also waives 10 months basic charge for switching users from other carriers. Combined of those aggressive campaigns, they keep the most user-increasing carrier position in October [J].
[update 2009.11.16]
A NTT Docomo seller shows “Buy Docomo, get free iPhone 8G” signboard. Of course you cannot connect the free iPhone to NTT Docomo network, but anyway you need a Japanese cellphone to access Japanese mobile web… so does this make sense??? (photo by cooley) 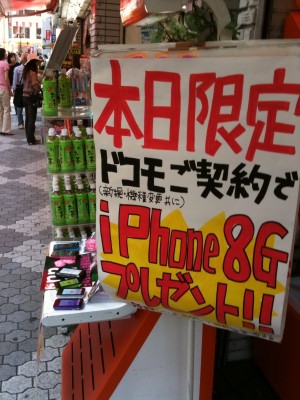