Last night, before the release of the first Android phone in Japan [J], NTT DoCoMo, Google and HTC Nippon(=Japan) had a “touch and try” event with 70 bloggers at Roppongi Hills. 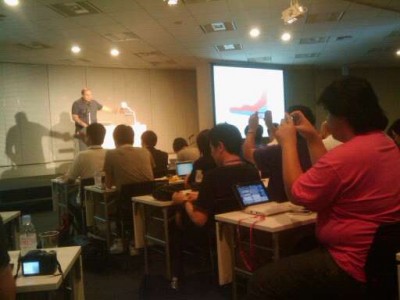 The new phone HT-03A [J] is based on HTC Magic, with some customization for Japanese market.

Omron’s iWnn is bundled. Wnn has over 20 years history in Japanese input on computers.
Japanese facial emoticons by text (kaomoji) are provided, 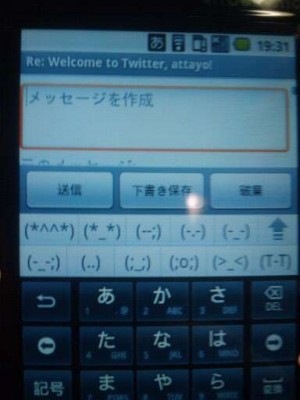 but I could not find if it also supports emoticon letters (emoji), which Softbank took time for support by iPhone software update, and Google is suggesting to include them into Unicode standard.
Another interesting feature is a new typing system to find a word by giving only number of letters in the word by using wildcard right-arrow-key. Although it is in Japanese, there is a demo video by HTC,

When you want to type “Insupire-syon”, which is a direct imported word of English “Inspiration”, in regular cellphone 10 key pads, you need to type “1100033366**9999000000033888888000”, 34 keys. Even some Japanese high school students do this blindly under the desk in classroom, it is a lot of push and not desirable for soft keyboard.
On the movie, on HT-03A, you may type first two letters (“11000”), then just press right-arrow-key for the rest of the word, “>>>>>>>”. Then dictionary will show you all candidates which start with “In” and has more 7 letters. In this case, the number of type becomes 12.
When I type the same word on my Window PC Japanese IME (Input-Method-Environment), I need 15 type so this sounds good. As far as the dictionary is good and you are typing words on dictionary.

Voice Search button seems to be removed on DoCoMo’s Android. If I remember correctly, Android’s voice search only works with English words so providing it may just cause trouble in Japan.

According to Google, Android Market on the DoCoMo phone is not filtered by language, so users will see many English applications/descriptions.
At the beginning, paid applications are not shown to users in Japan, to encourage users to download more applications. Google is preparing charging system and when it is ready, paid applications will be on the Market.
At Q&A time, most of questions was for the Android Market, which shows where attending bloggers interests are the most.

As always for global-model cellphone, i-mode and i-appli are not available.