YouTrivia (in Japanese, Kentei Gocco) is new style of advertisement to reach customers using trivia style questions to certain topics. The company named “Manabing” which means “on learning” in Japanese (http://www.manabing.jp). They grew 15,000 trivia for 8 million users for last three years. Their new ads attracts large clients like Nissan, Hitachi since it has low abandonment rate and good amount of hard core enthusiasts as users. Asiajin’s Yasuyuki Matsushita met with Mr. Igarashi of Manabing to drill down their success. 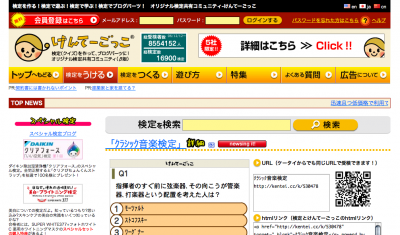 Asiajin: Can you describe original concept of Kentei Gocco ? Does this come from cultural preference of Japanese people who loves quiz or trivia ?

Igarashi: Well, our original vision was to combine education, entertainment and advertisement on Internet as our core business. We had discussion among our staff, it started as blog widget or something. But just within 10 or 20 minutes of dialog, it became idea of having serial quiz or collection of trivia on entire web site not blog widget. We have created web site in around 2 weeks and made it public. It was coincident that date was same as “niconico douga” (http://www.nicovideo.jp/) went public as beta, Dec.12 2002. I joined this company to make good web service which is greater than mixi which is No.1 SNS in Japan.

Asiajin: Do you have any difficulties on beginning ? You are quite popular so far.

Igarashi: No, not exactly. As we opened the web to public, we were lucky to have clients to turn our business on. It helped a lot. But it was so exciting to see first boom on a trivia happened then.

Asiajin: What was the first trivia which gathered so much traffic ?

Igarashi: First trivia was one about Urawa Reds, our premier professional soccer club in our region. It was spread by word of mouth to fans of the club around here, Urawa is our local town in Saitama, with deep knowledge of players and club which fanatic supporters typically has. That trivia has over 40K users so far. We also has trivia for each players of the club. We think these professional sports related trivia are pretty much popular. For example, trivia for hanshin Tigers. Other popular trivia for Junji Takada, a very funny comedian, has large amount of trivia and fan for it. He is crazy and funny like hell. His trivia is HOT 🙂

Igarashi: We had more functions at initial plan for web site. But as we see our usage of it, it is better to keep it simple. We used to have function like uploading images, it was cut by intention.

Asiajin: As I tried to answer a trivia for myself, after I answered several quiz, then it automatically starts Flash movie as advertisement before result come out. I think this is clever to do so since you want to know how you’ve done or points you got.

Igarashi: Yes. This is the good reason not let users leave our site. After you answered several trivia, then it is natural for you to wait the results. Our founder has background originally from e-learning industry, this is the result of these expertise which is not focused on functions but based on approach of education or psychology. Our clients are very happy that their messages are delivered appropriately.

Asiajin:We know that you have English site and Chinese site for these trivia. What about your future for these global expansion ? it seems that it is remarkable to company at your size to offer services in Chiense.

Igarashi :Yes. We found that Chinese contents or trivia had increased organically on our Japanese site with huge traffic from Taiwan. Most of these trivia has been made for Japanese singers or actors who are very popular in Taiwan so far. Of course situation are same for anime, manga or games in Japan. it is quite unique to find that these users in Taiwan generate “Own Trivia” so much. Yes, it is trivia for yourself. We don’t see that phenomena in Japan. It is quite fun to see.

Asiajin: You mean Quiz for yourself ?

Asiajin: It is funny.  Who would give correct answer to such personal stuff ? Family ? or friends ?

Igarashi: Friends, Maybe. We don’t see such stuff from Japanese users so this would be a character of personality which each nation has. Or maybe by their culture.

Asiajin: I know that your services are famous of using Amazon Cloud Computing in some respect. You are very early adopter of AWS aren’t you ?

Igarashi: Oh, yes. We had good learning period by reading bunch of English documents. 🙂  Our first deployment of AWS was around September 2007 so it is fair to say we are early adopter. I think wev service which is open to public, cannot plan coming traffic ahead like us is appropriate for using cloud computing. We also run consulting services for cloud computi¥ng based on ES2/S3, you can find useful information on our news site (http://cloud.manabing.jp).

Asiajin: You are giving seminars to public, right ? Can you tel me future plan for your business ?

Igarashi: We believe these quiz or trivia trigger users not by technical or informational but more emotional desire in people’s mind. So our plan is to deliver variety of serivces which mix not only advertisement but education, marketing activities, questionnare, user experimental testing so on. So we can be very unique company to the market.

Asiajin: Thank you very much. I hope to see your growth soon.

Trivia based new approach for let clients deliver messages is quite unique. Manabing and their Kentei Gocco is something you need to watch if you want to find the way on advertisement.