On the back cover of this issue of the weekly manga (Japanese comic) magazine “Weekly Morning” (which I fond of reading), Kosaku Shima from popular business manga series Kacho Kosaku Shima (Kosaku Shima the section chief) asked my help on Adobe’s website.


Weekly Morning’s printed circulation is over 410,000 copies every week [J], which is slightly out of top 10 among manga magazines in Japan.
Here is the site guided from the ad. Acrobat Magazine 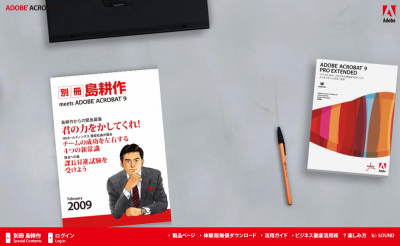 You may click to go through into the interactive comic to some point by guessing without knowing Japanese. There are manga with some interactive gimmics. 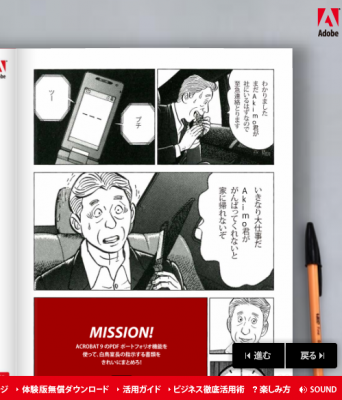 After taking some quiz about Adobe products, a namecard, which is thought as your alter ego in Japan, with the title “section chief” was bestowed to me as a blog widget (“blog-parts” in Japanese).

You may take more and more quiz about Adobe and get promoted to manager, or even become an executive by finding a secret way which will be disclosed later.
Kosaku Shima recently got promoted to the CEO of huge electronic manufacturer Hatsushiba (which models after Matsushita/Panasonic) in his about 40 years work life in a single, huge company, and that news was, even it is fictional, covered by a lot of nation-wide newspapers and television. His first policy speech as CEO can be viewed on YouTube. Working for your fist company for whole life is still quite popular in Japan.
He realizes Japanese white-worker guys’ dream by getting laid with a lot of ladies including his colleagues, wife of boss, industrial spy girl, singer, American and Chinese ladies, etc. still got huge business successes by accidentally seeing influential people like retired executives and a Howard Hughes-like billionaire. An extremely lucky guy.
He is a kind of succeeded big company worker icon for middle-aged Japanese male workers, who might be a decision-maker for purchasing software products. Well, maybe. That will be better than letting Dilbert sells software for enterprise.