CodeRepos is a software repository space where many top-level Japanese web programmers contribute and share their source code. 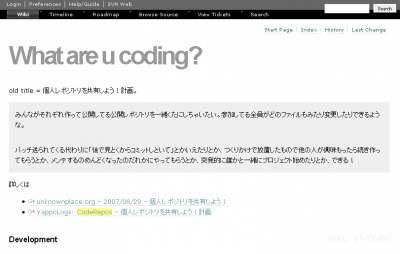 Kazuhiro OOSAWA, aka Yappo, is known well by his privately running Japanese search engine iYappo for more than decade, a famous hacker among Japanese Perl community, also called “Shogun” by some geeks.
On his blog on August 31st 2007, he called for participants for his shared repository server.
The site is run by open source repository tool SubVersion/Git and issue tracking tool trac.
Currently the number of committers is 542, most of their activities are in Japanese but more than 10 programmers not using Japanese are observed.
Over 28,480 commits have been done so far, 1202 open source projects are hosted. 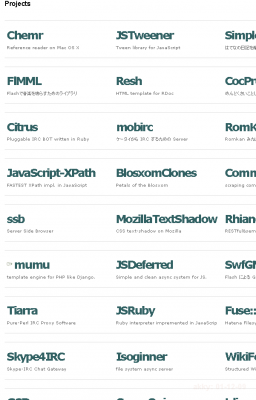 The most active area is Perl (which is very active in Japan), which is used in 576 modules, including Perl core code relevant to multi-bytes text handling. However, the repository also has many projects in 47 programming languages, website sources (such like a community site perl-users.jp) and even poem.
Registration is handled by Osawa manually, by reading applicant’s e-mail, and often their blogs, to see if s/he is really a programmer.
There is only one rough rule that you need to name sub-directory logically when you add a new project.
Basically, everyone can modify any piece of code on the repository, which seems much looser than other English based code repository sites on where projects have its own leader, license, roles and permissions.
Amazingly, this works well and there have been only 2 times system-wide disasters which had been caused not by malicious intention but by operation mistakes, and those were resumed back quickly as some members keep taking whole copy of the repository on their local.
All updates are being reported to an IRC channel (#CodeRepos@freenode), and many geeks are watching it.
The most interesting moment on CodeRepos is, as I heard from users, suddenly a certain project in the system got attention by a single interesting change, and the change reported on the IRC channel attracts a lot of other hackers, causes a lot of editing stream involves them over hours and days to make the project source code totally re-modified and shiny, online hackathon.
Obviously the CodeRepos is getting attentions from Japanese web developers who feels difficulty to play on English-based other repository services, and it has been encouraging novice programmers to open up their code in Japanese geekosphere. I am sure that it is also useful to search talented Japanese web engineers by reading their code, if you are seeking some for hiring but have no connection with Japanese geeks.

Poem by mala on CodeRepos [J]