Mixi Nengajou (new year greeting card) is not the only emerging service tries to turn online friendship into real items delivery.
This is too much of a coincidence that Mixi, Softbank (owns 40% of Yahoo! Japan) and au(KDDI)-DeNA(runs Mobage Town) launched virtual to real shipping services in last 2 months. 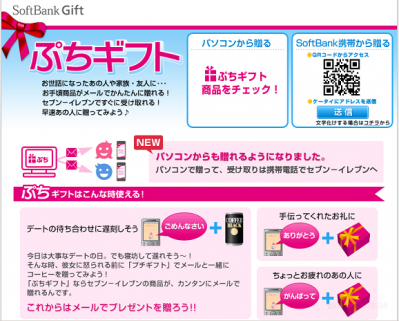 Softbank Gift has been letting you to purchase and send flowers/gifts/foods by giving your friends e-mail address on PC/mobile. Softbank Gift asks the receiver’s address so recipients do not have to tell their home address to presenters.
On new Puchi Gift, presenters can send 7 items (initially. Coca-Cola, Hagen Daz, canned iced coffee, blotting paper, etc.) at a nation-wide convenience store chain Seven-Eleven Japan. Then recipient got an e-mail with bar-code, and the code is a coupon for the item at any branch of 12,000 Seven Eleven shop. 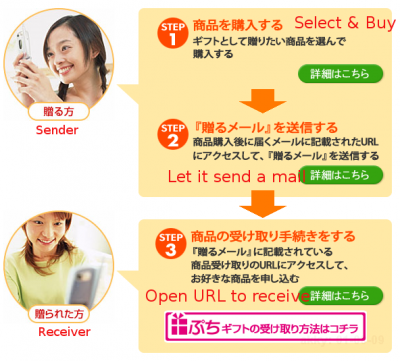 We already covered Mixi’s New Year Greeting Card service. This is a combined service with the No.1 Social Network service Mixi and the semi-national (recently privatized) gigantic company Japan Post.
This service was announced in Nov 2008, released in the same month, sold 700,000 cards by January 5th [J].

DeNA introduced the same function to the online shopping mall au Shopping Mall, which is co-operated by KDDI and DeNA. KDDI’s au is the No.2 cellphone carieer in Japan.
DeNA’s online mall is integrated with Mobage Town. At the beginning, 1500 items including Isetan, Senbikiya and Godiva Japan are listed.