Satoko TAKITA, chairman of Mozilla Japan gave the first announce of Firefox3 release in the morning at 2:00 a.m. 18th June (in Japan Standard Time), with looking back how they have been updating Mozilla products for years. 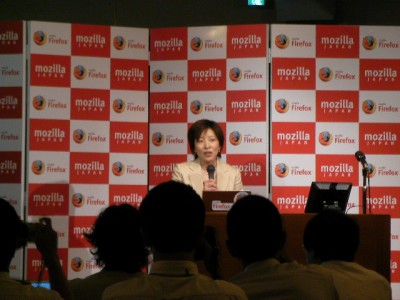 Firefox occupies 11.8% of browser share in Japanese market. Ms. TAKITA said that two things are important to spread Firefox more. One is to encourage communication among developers between Japan and the world, and the other one is to let Japanese companies use Mozilla’s Open Source technology to assist their development force.

A person from NTT Information Sharing Platform Laboratories explained the newly adopted Camellia encryption technology on Firefox3. Camellia was originally made by Mitsubishi Denki research in 2000, and was explained that is competitive method with leading encryption standard AES. 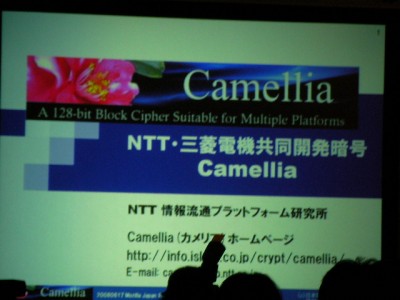 Daisuke AKATSUKA, freelance developer who has been involving Firefox Add-On development, talked on his Firefox3 download promotion project “Firefox3 no Tomoshibi” (lights of Firefox3).
On this site, every single Firefox3 download will be visualized on Japan map as a flash. Demo was done with current version Firefox2.
[Update]
The release time is cleared now. 02:00 18th in Japan time.
[Update 2]
I could download it at 01:52.