On Friday, Japan’s very own video portal and geek paradise Nico Nico Douga announced a partnership with this country’s most influential web site, Yahoo! Japan.
First, Nico Nico decided to expand its “ichiba” (market place) offering by adding a Yahoo! Shopping button beneath all of its videos. Users can alternatively click on an Amazon button to see merchandise which is somehow related to the videos they are watching. Moreover, it is possible to download music and ringtones.
Picture: New Yahoo! Shopping button 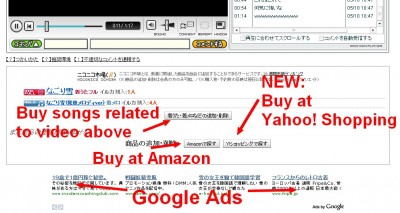 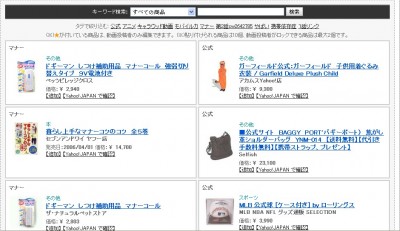 It is about time Nico Nico Douga made a move. While the site is wildly popular especially in the otaku community, Dwango (Nico Nico Douga’s parent company) is said to lose around 100 million Yen a month due to high server and other costs.

Also, Yahoo! Japan now integrates videos from Nico Nico into its search index (under the video tab). This is the first time Nico Nico shares information with outside parties. Users still need to login in order to actually view the material though.
As a third result of the collaboration, it is planned that users owning a Yahoo! Japan ID can soon login to Nico Nico without registering to the video service (probably by OpenID).
If this collaboration doesn’t help Nico Nico to further expand its user base and sales, I don’t know what will.