Even the Tech-savvy Japanese still love their print media. In fact, this country is one of the biggest markets for printed information in the world and the variety of magazines is sheerly amazing. At one time for example, there were eight periodicals specifically catering to homemakers who made a living by trading stock online! Also, in Japanese book stores you can read every magazine, newspaper or book you want and as long as you want. No clerk will come and harass you…

Now, Yahoo! Japan decided to launch a new service on June 23rd enabling users to read articles from a total of 22 printed magazines online and free of charge. The company said the selection covers periodicals for men, women and lifestyle in general. The magazines, published by Kodansha and Shogakukan amongst others, will also provide Yahoo!-exclusive stories, including video. 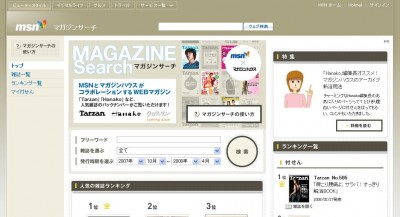 Yahoo! Japan’s rival (sort of) Microsoft Japan made their move already. In collaboration with publishing company Magazine House, Japanese users are able to view free magazines on a dedicated web site big M launched Thursday. Microsoft will only offer digitized backnumbers though. At the moment, the offering is limited to Tarzan (a lifestyle magazine) and Hanako, a periodical for women. The content can be viewed using the browser so a software download is – thankfully – not necessary.
Microsoft’s initiative isn’t really that exciting. But Yahoo! Japan’s announcement actually marks the first time for centralization of digitized content provided by top publishing companies on the web. The online revolution of the Japanese media landscape continues.