I admit to being a net video junkie. More often than I probably should, I find myself spending time on sites like Youtube, Nico Nico Douga or Veoh. As there are hundreds of services of this kind on the web now, search engines specializing in digging up videos started emerging in the past months.

One promising video search service and a genuine Japanese product goes by the name of Fooooo. Daisuke Tanaka, director at Bank of Innovation (the company behind Fooooo), was kind enough to personally give me some insight on the service on a recent occasion. 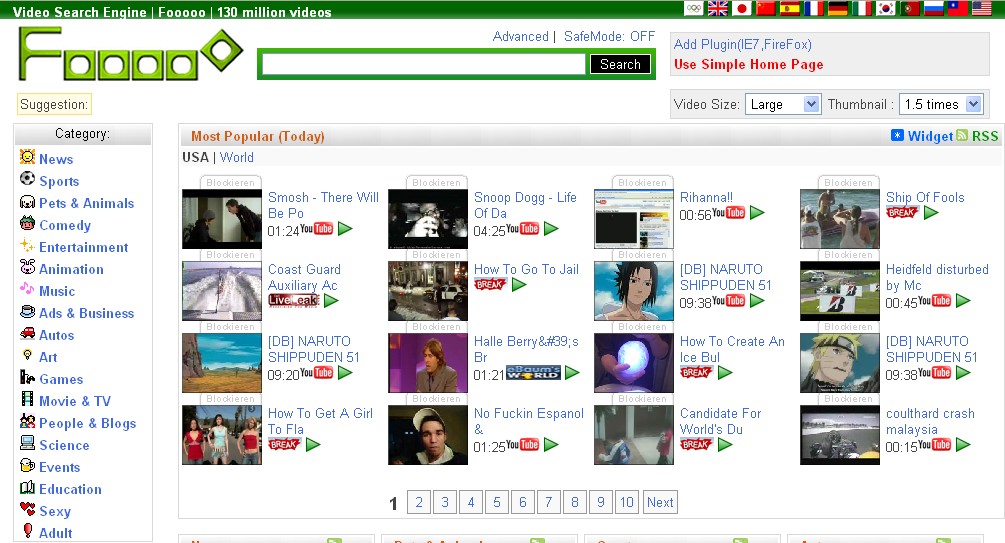 At the moment, Fooooo is able to search a whopping 130 million videos from nearly 100 sources from the most different backgrounds. User can browse the site through accessing 18 different categories, they can view the most popular videos of the moment as suggested by Fooooo and -of course- can search via keyword input.
In the latter case, users don’t have to type in the whole search term since the service will complete it for them. When typing, Fooooo simultaneously offers a handful of contextual suggestions displayed in a container under the search box. This is a really cool feature and I found many interesting videos just by that way!
Moreover it is possible to limit search by play time of the videos and different channels.
As the world’s first video search engine, Fooooo established a Facebook application with which you can use main functions. The application works well but I personally prefer the “traditional” way of accessing the site itself. Fooooo also offers a widget and an RSS function.

Fooooo faces a couple of competitors in the video search field: Blinkx, Truveo, Dabble, EveryZing and newcomer mefeedia to name just a few. The Japanese player approaches video search in a different way however. Blinkx for example utilizes speech recognition technology to search within videos and puts its services in a much broader context. From a function-based point of view, Fooooo is rather comparable to video aggregators Truveo or Dabble. In my opinion, Fooooo is superior in terms of design, usability and size of database accessed.
Daisuke told me he wants to accelerate internationalization of his service. The initial homework is done already since the company undertook a considerable effort to fully translate Fooooo. Main languages covered at the moment include:

This is an impressive list. In addition to the translation, Fooooo differentiates the “most popular” videos of the day (prominently displayed in the middle of the home page) by country/language selected. As a German, I have to say the Teutonic version is not translated well though. The English and Japanese sites are alright. I am not sure about the other languages.
However, many more Japanese web companies should go the “Fooooo-way” and make their services available for a global customership from the get-go.