In April last year, Japan’s first so-called Cyber University opened its virtual doors.
The university is private and headquartered in Fukuoka on the southern island of Kyuushu. It is run by a nonlisted stock company called Japan Cyber Education Institute which is mainly controlled by Japanese Internet telecom giant SoftBank.
As of now, approximately 1,900 students are enrolled who can graduate with a Bachelor degree in IT and business or world heritage. All correspondence-type courses can be accessed via the Internet. 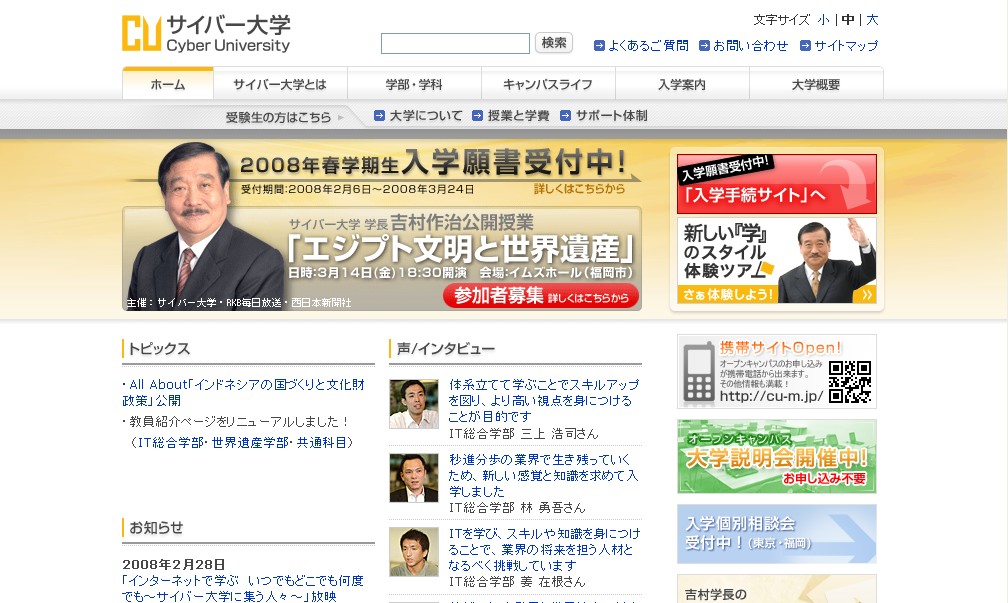 While this is a cool idea especially for homemakers, ambitious people with stressing day jobs and retirees, it’s not really new. There are many universities offering academic material online and Japan’s Cyber University is not even the first fully online academic institution in the world.

Courses via the mobile phone

In November last year however, the Cyber University took its concept one step further by expanding it to -you guessed it- mobile phones! The first cell phone course is entitled “Mysteries of the Pyramids”.

The mobile version of the PC site is naturally stripped down concerning contents and appearance and can be partially viewed here. What’s missing is the actual course which is available as a combination of streaming video of a power point presentation and the professor’s audio. It can be accessed using SoftBank 3G phones only (via their “S-Appli” function). Interestingly, no tuition fee is charged for this particular mobile course and users do not have to be enrolled in the university.

The concept has pitfalls some of which are obvious. Offering courses online only means that interaction among students and professors is restricted to emails, electronic forums or social networking platforms. It is also impossible to ask questions to improve one’s personal understanding and actually change the way classes are held.
Moreover, the Japanese Ministry for Education, Sports, Culture, Science and Technology issued a serious warning to the Cyber University over possible cheats just in January this year. The ministry criticized the university’s handling of student identification and said it must improve measures to prevent the use of ringers.
Overall, this is really a cool and innovative concept even though the class on pyramids is still considered a test by the university. The cell phone is the ubiqitous platform for Japanese people when it comes to accessing the web so it is no wonder that the first step was made in this country.
We can surely expect to see the concept taken over in other countries in the future.